Royals speedster Paulo Orlando has most recently joined this group of mainly obscure players. But, only these live ball era players started their careers in an unusual way. What distinguishes the starts of these players’ careers among those of all other live ball era players? (Click on MORE to see the full list of quiz players)

No Statistician But got things rolling by identifying that our quiz players had all recorded two or more triples in their first 5 career games. But nobody took it the rest of the way to note that, despite that quick start in compiling this rarest type of hit, none of our quiz players could add more than two more triples over the balance of the first 100 games of their careers, a peculiarity reserved for these players among all others with 100 game careers since 1920.

There have been 46 players since 1919 (Ivy Griffin was the player who started in 1919, but he’s been included as a live ball era player since he played 168 of his 185 career games since 1920) who started their careers with multiples triples in their first 5 games. Of these, 12 failed to play 100 games in their careers and 22 recorded three or more triples over the balance of their first 100 games, thus leaving our 12 quiz players.

The most recent player to join the group was Paulo Orlando who holds at least a share of the career record for triples after n games for all values of n from 2 to 22. But even the speedy Orlando (who is also the only searchable player to record triples for each of the first three hits of his career) couldn’t muster more than two triples from games 6 to 100 of his career, and so, perhaps surprisingly, ends up in our quiz group.

Guest
no statistician but
Share On TwitterShare On Google

Two or more triples in their first five games.

That’s the first part, but there have been many more players than these who have done that, so there’s something else.

No idea but I but it a little odd/ironic that the careers of Jim Ray Hart and Jim ray almost perfectly overlapped.

And the 6 times they faced each other here were the results: one K, one GIDP, one HBP, two sac flies, and one groundout. That’s a pretty weird constellation of events in only 6 PAs.

There’s also a Jimmy John Hart who played for the 1901 Baltimore Orioles (the forerunner team to the Yankees). He was having a pretty decent year when, in August, he was suspended and fined for punching an umpire. The Orioles paid his salary during Hart’s 10-day suspension after which Hart returned with a 4-for-4 day, but then quit when the team refused to pay his $25 fine. Hart never played in the majors again.

Can you really search the play index by partial names (initials, first names, etc). I would really like to be able to do this, but I didn’t think it was possible.

Okay, but how do you do that? I don’t see any name filtering criteria in the Play Index

You must have to be a subscriber to see those. The only non-statistical choice I have is Place of Birth, which is the last stat at the lower right.

Yippeeyappee: Look above that. You’ll see 5 boxes that say “Choose a Stat”. That’s where you need to go. (I’m a non-subscriber as well).

Guest
Kahuna Tuna
Share On TwitterShare On Google
I did my search differently. (Didn’t know about “First name begins,” etc. in the Play Index!) I clicked on “Leaders” in the main top tab set (five to the right of “Play Index”), then, under Batting Leaderboards, Statistic “Home Runs,” I clicked on the “Career” link. At that point I did a Control-F Find for the text ” c” (space–c), which highlighted the first letter of all last names beginning with C. Then I just eyeballed the highlighted last names to identify first names also beginning with C. That gave the seven names of CC players in the top 1000… Read more »
Vote Up
0
Vote Down  Reply

You can get those without being a PI subscriber. Then, cut off at whatever total Mr. 19 has and turn the search to ascending sort, and finally sort your results by the desired column and le voici : 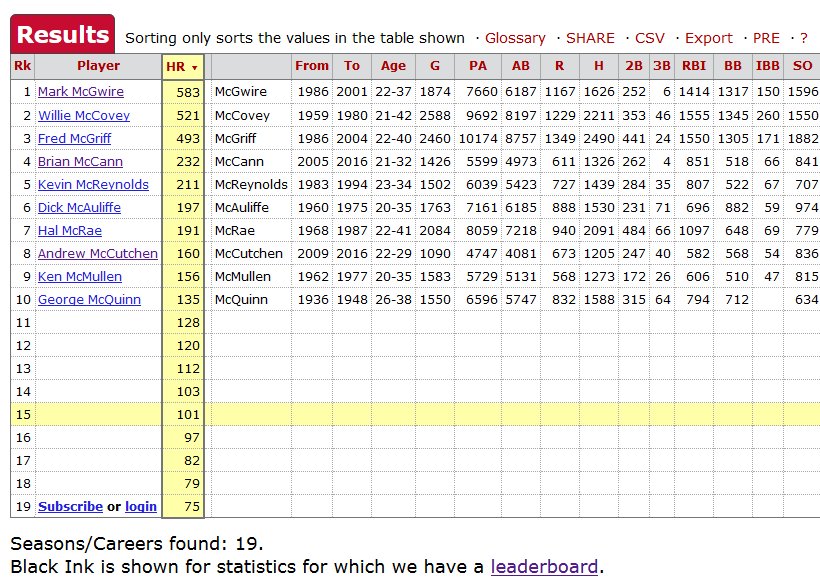 …but it’s only available on certain searches. (Season, I think, but not Game ?)

Thanks Oneblankspace! Just what I needed! On my first test, I found out that no player who’s first name starts with I has more than 26 career home runs. That’s pretty unusual!

Now for a search where name Contains a letter string 🙂

Are you sure? We all know that Ivan Rodriguez has more than 26 HR. I hope I understand your statement correctly. And I can do a name with a letter string but not with the BR PI.

I typed too soon without checking. When I saw Incaviglia wasn’t included with last names, I knew I was doing something wrong.

OK, Now I see that it only allows 20 results, so I will play around a bi more

Guest
Doug
Share On TwitterShare On Google
I’ll take JH to see where Jim Ray Hart stands. Turns out he’s fourth with 170 career homers, behind Josh Hamilton, Jeff Heath and J.J. Hardy. Hart may hold that position for a while longer as his closest active pursuer is Jason Heyward with just 99 long flies. Those home runs are part of the answer to the quiz I posed in comment #3. Hart is one of those illustrious 16 sluggers by dint of recording 5 seasons by age 26 of 20 HR, 75 RBI and 125 OPS+. If (or when) Mike Trout joins that group this season, he’ll… Read more »
Vote Up
0
Vote Down  Reply

Guest
brp
Share On TwitterShare On Google
Legitimately never heard of Jim Ray Hart until this thread. Very odd career, essentially done as a good player in his mid-20s. It’s also amazing how much of the odd-man-out he is on that list of 16 (likely soon to be 17) players. The next-“worst” player is probably Darryl Strawberry and his career had an obvious reason for getting worse. Apparently Hart was a poor fielder at 3rd, but you’d think they could have stuck him out in a corner OF spot dealt with it. The BR bullpen seems to attribute injury/weight gain as an issue as well.
Vote Up
0
Vote Down  Reply

BRP – This article suggest a couple reasons for Hart’s decline. One is that he hurt his shoulder in April of 1969 but didn’t have surgery until after the 1970 season. He also had problems with cartilage in his knees. On top of that, there’s clear evidence that he had a drinking problem.

It’s completely different, but Frank Thomas had three triples before he hit his first career home run. After that, he had 521 HR and nine more triples.